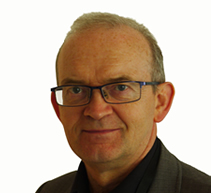 Richard is seconded as Strategic Advisor to the Clyde Mission and to Glasgow City Region. Until October 2020 he was Director of Regeneration, Environment & Growth at West Dunbartonshire Council, with responsibility for Housing, Economic Development & Regeneration, Business Support, Roads, Transport; Waste Services and Greenspace.

He has over 30 years of experience in economic development in the public and private sectors, having previously held posts as Head of Economic Development for a global audit practice, for the Audit Commission in London, and at the City of Glasgow. He is Chairperson of the Glasgow City Region Economic Intelligence Group.

In his spare time he is a Director, and Chair of the Finance Committee, of the Glasgow Film Theatre, Glasgow’s art house cinema and hosts of the annual Glasgow International Film Festival. Richard has also been a Director of the Clydebank Property Company since October 2014. Richard has been a member of the IED since February 2011 and a Director since November 2011.